Had my first proper day of work again, through in Perth at my sister Sarah's shop - The Tayberry Gallery.  Did more chatting than working but did manage to finish a necklace, on sale now of course in the aforementioned Tayberry Gallery, from peg to shelf in the matter of minutes, how satisfying!  The necklace is part of me and Sarah's joint jewellery collection we've been working on together, I don't have a photo of it, but here's a couple of brooches and some cufflinks instead! 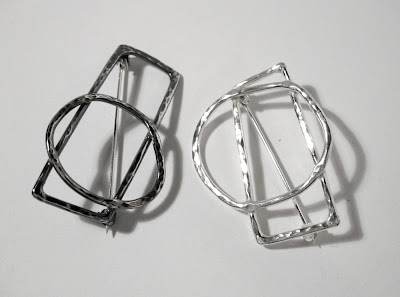 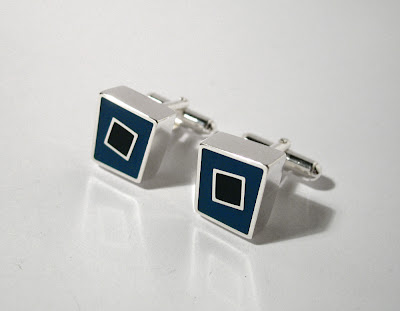 Went out for a wee walk (big walk for me right now!), Perth was beautiful today!  Popped into meet Janet Eagleton, renowned sporran maker, to bend her ear a bit about sporran cantles, something I hope to start exploring soon, I've got some awesome ideas!  Visited Boo Vake as well for a wee chat with the lovely Arlene and a browse of her quirky and colourful shop.  Got all inspired by the worn sandstone with pebbles poking through on the Perth Bridge, ideas forming for my first box designs, another project for this year. I recently completed a commission for a set of boxes and I enjoyed making them so much and now I just want to make more, I like the lid thing, there's something so joyful about opening something up to see what's inside!  And here they are!.... 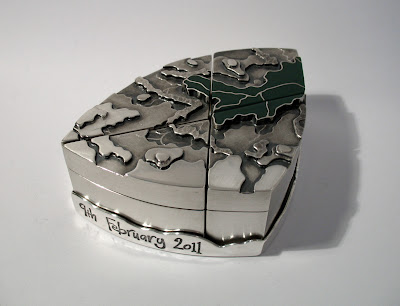 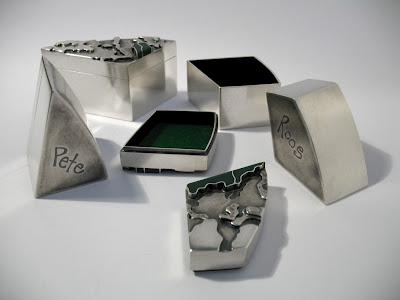 They were designed to celebrate the adoption of a couples two children, one box for each member of the family.  The design on top is based on the landscape of Corrie Fee and Glen Clova, the centre point being the location of the couples marraige.  The hilly ring holds the four boxes together symbolising the everlasting bond of the family.

Couple more kilt pins made recently too.... and of course! if you haven't seen it already! my (almost finished :/) scrubbed up kilt pin website!

Excited to be showing four pieces at Treasure, part of London Jewellery Week, next week with the ACJ!  Here they are!........ 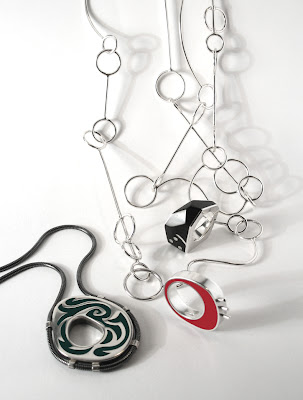 That's all for now folks!
Posted by Islay Spalding at 03:32 2 comments:

What a silly few weeks I've had!  After finishing a challenging commission for a set of four silver boxes I'd rolled up my sleeves up further and spent three days destroying a monstrous to do list culminating in playing at a Mess Dinner with the OTC band and then drinking too many sambucas in Liquid nightclub (I know, I swore I'd never go there), I was looking forward to my Thursday tootling about the flat and taking it easy!  But my day off was ruined by a sore tummy, assuming I had the sickness bug my sister had a few days earlier I just felt incredible sorry for myself and did a lot of writhing.  After a sleepless night my sister made me phone the doctor, I got an emergency appointment and hopped in a taxi in my joggys assuming it would be no worse than a trip to the pharmacy for a big box of laxatives.  But they sent me to the hospital!! A long wait on an uncomfortable gynae trolley (actually at this point even a cloud would be uncomfortable), x-ray, CT scan and not forgetting the disappointing enema later I was told my right bowel was twisted and they'd have to cut a bit out and stitch it up again - a right hemicolectomy for all you doctors out there!

So while I was meant to be spending Saturday night celebrating the first pipe band competition of the year for us mighty Mac Cal's instead I was in surgery, luckily I found the whole thing extremely fasinating!  I spent a few days in hospital when I was 5 with a fractured skull and have pretty clear memories of it (the only day I went to school dinners in Primary School I fell in the playground, it was mince pie, I didn't like mince pie) but I'd never even had stitches, never mind drips, cannulas, catheters and a down my throat.  Fortunately the latter two got removed before I had hit reality, damn morphine's good! But the whole experience, although obviously I wouldn't want to repeat it, was pretty interesting!

I had a couple of days with my PCA morphine feeling dead perky, had lots of visitors, cards, lego and nice messages which I was sneaking a look at on my mobile, read magazines and books, had snoozes and did lots of people watching, a hospital ward is brilliant for this! Some interesting characters indeed! And I was lucky to have some great nurses and doctors, especially my sisters boyfriend Luke who works there as a doctor and popped in to give me the low down everyday and kept my mum informed during my surgery, that actually made a huge difference and totally put me at ease.  It's scary how quickly the simplest things can suddenly become such a challenge, it seems a bit unreal now how pleased I was just to get into the chair myself.  On the Tuesday they took my morphine away and a got my first taste of hospital food, some clear soup and jelly... bleurg!  Bit of a downer that day and started noticing annoying things, like the lack of anywhere to put things down in the toilets and shower rooms - for the want of a shelf!  Staff moving your table away when you've spent so long getting everything within arms reach and being left wandering about dragging your drip trying to find a nurse to hand your piss pot to!  But I was recovering fast and two more days and wards later I was punted oot with a big bag of painkillers and lots of new lego to build!
So overall my hospital experience was pretty good, the nurses all seem to work so hard but it does seem they are short of staff, there's certainly no time for anything but the necessities when it comes to care and if you don't ask you probably don't get.

So now I'm at my parents house getting looked after and doing some convalescing, done a lot of film watching and lego building, some drawing, finally finished my new Kilt Pin website, no wait, that's a lie, the shop is still on hold... arg! Go look anyway! - http://www.islayspalding.co.uk/kiltpins.htm - gave the rest of it a bit of a scrub up to and uploaded loads of new jewellery photos, so that's something productive!  Still got a couple of months accounts to do...(been putting that one off!) and some design drawings I should be getting on with, so plenty of sitting down type activities!  This is one of those times I wish I had an employer to give me sick pay! Aim to ease myself into workshop next week, be ready for ceilidh dancing and a bouncy journey from Rum to Mallaig in a RIB by the 19th, and then paintballing by the first weekend in July, and of course be ready to wear a drum again for the European Pipe Band Championships in Ireland in July!

Right enough about me, sorry about the pure wall of text! Next post will be about JEWELLERY! Yay!

Oh, and moral of the story - Don't go to Liquid Nightclub or school dinners.